Dating, Love, & Sex: The Experiences of Women with Disabilities (Part 1) »

Athletes with Disabilities in the News: Isaac Lufkin & Derrick Coleman

Athletes with disabilities have been making incredible headlines in the news lately.  This week, I wanted to share the stories of two football players who are breaking barriers and using their life experiences to encourage others to pursue their dreams, and has not allowed their different abilities to define what they are capable of.

Isaac Lufkin:  Teen Football Player in Rhode Island Who Has His Eyes on the NFL

Isaac Lufkin is a determined high school football player with big dreams of playing in the NFL.  Lufkin is a kicker for Classical High School in Providence, Rhode Island.  Lufkin has grabbed the attention of not only those within his community, but also those throughout the country with his story.  Lufkin was born without arms, yet he has not allowed his disability to stand in the way of dreaming big about possibly playing as a defensive lineman for an NFL team.

Lufkin’s independent streak was witnessed at a young age by his parents, and he has taught himself how to eat, play the keyboard, and play video games with his feet.  Lufkin remarked that he does not want pity, and from what you see in the video, you will definitely understand why he made such a poignant statement.  Lufkin is one of the millions of Americans who uses their “different abilities” to their advantage, and does not allow their differences to keep them from creating a grand existence. 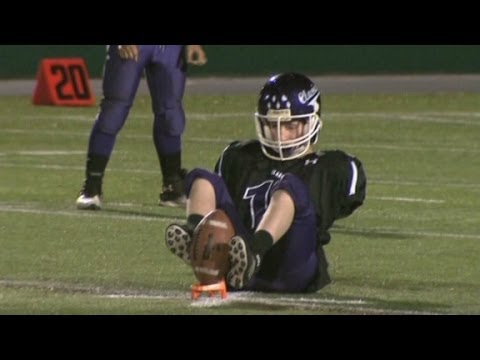 There is no denying the empowering story of Derrick Coleman, Seattle Seahawks’ fullback, especially after Sunday night’s Super Bowl win.  In mid-January, Duracell released a commercial featuring Derrick Coleman that showcased how he remained steadfast in his ambition to play professional football, and his refusal to be defined by his different ability.

The commercial has captured the attention of many across the nation, especially those within the hearing-impaired community.  At the age of three, Coleman was diagnosed with an incurable hearing impairment that caused him to wear a hearing aid.  Coleman endured the negativity of people telling him to forgo his dreams because of his hearing impairment.  Instead of allowing such statements and attitudes to influence his life’s path, he decided to work harder to achieve his goals.

Coleman had faced setbacks on his journey to becoming a professional athlete. His name was not called during the 2012 NFL Draft. Though he was eventually signed by the Minnesota Vikings, he was cut right before the start of the season. Most people would have given up on their dream after experiencing such crushing defeats, but not Coleman.  His determination and talent led to him being signed by the Seattle Seahawks in December 2012 and becoming the first legally deaf offensive player in NFL history.  He can now add one more milestone to his list of achievements:  being a Super Bowl champion.

Joining the NFL was his great career aspiration, but the focus Coleman currently has is to inspire children with disabilities to achieve their own dreams.  In an interview with Sports News, Coleman stated that he “wanted to inspire people, especially children, to trust the power within and achieve their goals.”  Coleman’s youngest fans are indeed watching his every move, and are encouraging him to continue breaking glass ceilings.

Riley Kovalcik wrote a letter to Coleman, and shared that she and her twin sister had something in common with the NFL star – they, too, wear hearing aids.  In the letter, Riley remarked at how she understood what Coleman goes through, she encouraged him to do his best, and stated that she had faith in him.  The letter was shared on Twitter by Riley’s father, Jake Kovalcik, and has since gone viral on social media.

Being moved by the letter, Derrick Coleman wrote a response to the girls, and tweeted his letter.  Coleman thanked the girls for showing their support to him and the Seahawks, and stated that they are more than capable of achieving their hopes and desires, regardless of their hearing ability.

As a person who has moderate hearing loss due to my disability, and wears two hearing aids, seeing Coleman’s story has had a profound impact on myself, like countless others.  Coleman’s story may be considered “inspiring,” but in actuality, he made the conscious decision to not allow his seemingly “limitation” to control his destiny.  Coleman represents the millions of people with different abilities in this country who are shattering glass ceilings and making a name for themselves in their respective fields.

We need more of these stories to be shared so that children, adolescents, and adults with disabilities will know that the only person who can truly hinder their progress is themselves.  Representation of people with disabilities in the media, sports, etc. is imperative, and I am proud that Lufkin and Coleman are representing the millions like Riley and myself through their sportsmanship and by sharing their life stories.